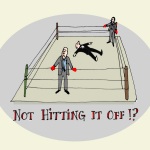 Staff are performance managed when they’re not quite fitting in – ever hopeful of significant improvement. On the other hand, directors just get booted.

Over the last 17 years of headhunting, I have received many calls from directors who have been booted by their employers.

Often, newly booted directors will talk about the fact that they wish to find something new, but there’s no rush. This usually means that they are working their notice either at home or have arranged a ‘compromise deal’, or ‘settlement agreement’. The same scenario by different names.

A settlement agreement is essentially a sum of money to shut you up and not make a claim against the company for unfair dismissal since you are likely to be leaving the same day they decide your face no longer fits with the organisation.

When your face doesn’t fit anymore, take the money and move on. Negotiate the best deal based upon the likelihood of finding something within a reasonable timescale within your discipline. Compromise deals vary depending upon the length of service and other factors.

There is little point dressing it up as something else because everyone knows everyone and an HR reference doesn’t go far when senior bods speak to each other.

When you face this shocking event, it is essential to take some time-out to reflect, before rushing into the next job.

If the timing works and there is a job just around the corner for you, great – go for it.

Think long and hard about the culture of the business you have just left and whether you’d like to repeat the same. It’s easy to think that the speed of returning to any job is important, often a decision made in haste will be regretted later.

Your value hasn’t changed. You are still the same person you were last week or last month or last year. What has changed is the company’s view on whether you fit their organisation anymore? The business might be out-growing you.

Try to be realistic about your situation. It’s much better to say I’ve been booted out because they had other ideas and we were not aligned in our thinking than to say you’ve resigned suddenly and working notice from your garden. It might be that you have resigned and have been forced to work from home, as part of a confidentiality issue, but honesty is the best policy when speaking to a new employer.

Companies make changes all of the time at Director level and it’s not a big deal. You won’t be the only Director on the planet who’s taken a whack of cash and considered your new options. Few directors leave a business, many fall out of favour.

When it happens to you, there’s an automatic feeling of failure. Most of the changes are personality clashes, not performance issues. Sometimes a combination of both, but that being the case, why do so many get back to work relatively quickly afterwards?

I hope this insight has been helpful and that you remember my observations.